So after doing some fun work with great friends, I thought I’d give just a quick update. Here’s what’s shakin’:

Original rough-draft cover art for Language of the Bear: 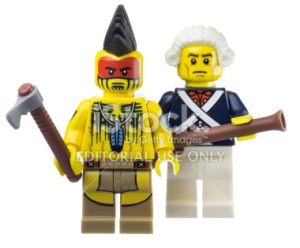 Lego already made a Wolf Tongue and Pyke set!

OK. No, it’s not. But it was a pretty funny find when we were just browsing stock photos. And if not for LOTB, there’s always book two. Speaking of which …

Through the Narrows is almost done! Yes, a little later than we planned (sorry!), but we’re taking a little extra time to make sure it’s just right. And so far, the reactions we’ve gotten are that this book is even more suspenseful and faster-paced than LOTB.

So the release is coming soon and if you want a sneak peek at the cover art and jacket copy, we’ll be releasing that to our mailing lists before anywhere else—so please make sure I’ve got your email.

Tomahawk and Saber books 3 and 4 are going to knock your moccasins off. Evan and I did some semi-detailed outlines for the next few books, and as much as I think TTN is upping the tension and thrills, the ones that come after are going to keep that momentum going. No spoilers, but suffice to say I’m very excited to start putting our characters back into harm’s way. This, of course, means lots of writing.

My solo project hit half-way. As I’m writing novels with Evan Ronan, I’m also typing away on solo projects. I’m not in the habit of talking too extensively about works in progress until they’re completed, so this isn’t a pitch. Just me letting you know that I’m still writing. And also that I’m really enjoying the scenes where Rammstein is the perfect soundtrack and that I’ve only got about another 50,000 words until I write “The End.”